Why I think homelessness has become a pivotal issue in California

The growing homeless community in California has become a major concern for cities to face; and for those of us living here in homes wondering what all of it will mean. It’s become the focus of conflict between the Trump administration and a list of California officials, headed by Gov. Gavin Newsom and LA Mayor Eric Garcetti. But the debates, along with news coverage, conversations, and stories people tell about interacting with homeless people, have become a regular occurrence here during the past year. 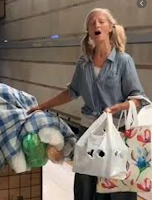 That community has grown in recent years. California has the largest homeless population in the country — nearly 130,000 people as of 2019, according to a federal task force on homelessness. In 2019, there were about 567,715 homeless people living in the US according to a study. This number had been steadily decreasing since 2007, but in the past two years it started to increase.

One of these people (as seen in the photo on the left) made quite a splash in the media last fall. A homeless woman sang opera on a subway platform in Los Angeles on Sept. 26. Viewers reached out on social media to offer Emily Zamourka, 52, housing and support.

There’s a lot more to the state of homelessness, if you look at the numbers. Here’s some of my research and analysis on the issues behind it all………..

#1:  Homeless people are living on the fringes of the most popular — and expensive — places to live in America. 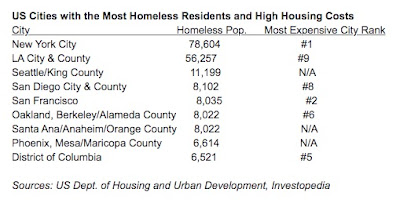 If you look at this table, you’ll see some of the most popular and talked about metro areas that young people are moving to. There are also a lot of high-paying jobs in these areas, too, which is becoming more necessary to live there as the cost of housing goes up annually. Just look at the ranking of the most populated homeless communities by city with their ranking on the most expensive US cities to live in. It’s tough to afford housing there, even if you have a decent job. It’s said to be the main reason why people are grouping together in houses and apartments these days in larger numbers. Much more affordable and attractive parts of the country aren’t seeing anything like these expensive fast-growing cities are going through. 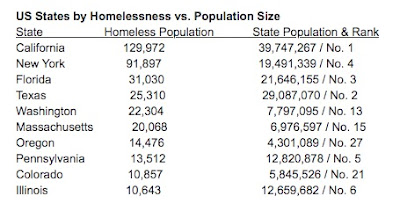 The National Alliance to End Homelessness calculated state homeless numbers in ratio to overall population, or one homeless person to every 10,000 people living in that state. New York had 46 people homeless per 10,000, California was at 33, Oregon was at 35, Washington was at 30, and Massachusetts was at 29 in the 2018 data. For the larger states with sizable homeless populations, a few were down on that scale. Illinois had 8 per 10,000, Texas had 9, Pennsylvania had 11, Florida had 15, and Colorado had 19.

It’s happening around the country, usually in metro areas that have always had a lot of appeal for people to move there.

#3:  This is nothing new in Los Angeles.

It’s been escalating in the past few years, but it’s been in the making for a long time. People who’ve traveled through downtown LA regularly (such as commuting to work, or living nearby in Pasadena, Glendale, Burbank, Los Feliz, etc.) have been telling me about this growing disadvantaged population since about 2005. Some of that has to do with job loss in the area, access to soup kitchens and shelters, and a lot of gentrification. People were spending a lot to live in loft apartments, and buildings were being constructed and refurbished all around in downtown LA. Lower income people had no chance of being able to afford to live there.

By 2012, the surge started to increase — from about 32,000 homeless people that year to roughly 55,000 in early 2018 in Los Angeles. LA voters supported a tax they would pay over 10 years to generate $4.6 billion to build 10,000 housing units over that decade. It would also provide support services for homeless people. LA and other cities have been trying for years to provide support services for the homeless, with the hope that many of them would be able to find housing, and leave behind setting up tents in parks or above concrete river beds.

#4:  The homeless community is made up of groups living out on the streets for different reasons.

The homeless population appears to be much younger now than 10 years ago. Many are wearing much hipper and stylish clothes, and sometimes share them with experienced and long-time homeless men. There are lots of young homeless couples out there, and groups of friends — with some of them riding bikes together.

There's a lot more going on in retail stores involving homeless people — some are asking for donations outside stores, and are sometimes committing light crimes such as shoplifting in the store. You’ll notice a lot more security guards on duty in retail stories, and bathrooms with door locks and codes you have to get from staff to open these doors.

Some of them are very high on drugs. One young man who appeared to be homeless walked up to me recently and said, “Get the fu$k out of my way,” and then laughed as he nearly walked into me. Facial expressions and behaviors coming from some of the homeless population indicate that mood-altering substances are likely part of it.

One theory I’ve heard is that a lot of young people originally came to Southern California for drug and alcohol rehab treatment programs, and then left these facilities early and ended up on the streets. They’re doing a lot of “smash-and-grab” theft out of cars and homes to get high once again.

There's also the nice weather here. It's got to be a little bit easier being homeless in California than in Minnesota, Ohio, or a number of other states with smaller homeless populations.
Posted by Jon LeSage at 8:17 AM

Jon LeSage
Jon LeSage is editor and publisher of Green Auto Market, a weekly e-newsletter tracking sustainable mobility. He's also the author of Tales of UberMan: An auto journalist shares his Prius with savvy riders. Along with writing about cars, politics, economics, and tech trends, he loves to watch Netflix and Amazon, listen to Pandora, travel with his girlfriend Susan, and hopes to someday be a stand-up surfer.